The ruined town of Kayaköy sits on a steep valley slope between the seaside town of Fethiye and the stunning resort town of Ölüdeniz. Once known as Levissi to the Greek settlers and as Kayaköy to the Turks, the town was built and occupied by Greeks until the population exchange was made in 1923 when most of the town's population was deported. Greek Macedonian Muslims took their place but the quaint town was not to the liking of the new inhabitants who chose to build their own homes on the flat fertile soil of the valley and the once-prosperous town quickly fell to ruin. Kayaköy is now appropriately known as The Ghost Town as the entire village is a standing museum.  Around 500 houses remain as ruins and are under the protection of the Turkish government, including two Greek Orthodox Churches, which remain the most important sites of the ghost town. There is a private museum on the history of the town and in the middle of the village stands a fountain that dates from the seventeenth century.

Today you can walk through the cobbles stone streets which stretch across the width of the valley framed by thick forest. Wander through abandoned houses, schools and churches. Many of the old stone walls are crumbling and some places are heavily overgrown. The Ghost Town is particularly enchanting at sunset when the trees cast long shadows over the derelict buildings.

Below the ruins are the modern Kayakoy, a small village which offers visitors a handful of traditional restaurants, souvenir shops, camel rides and accommodation for holiday makers.

Kayaköy is situated between Fethiye and Ölüdeniz just a short drive away where there are numerous beach including Çalış beach and the Blue Lagoon beach among many others. For more details on beaches in Fethiye and Ölüdeniz please browse our guides for those areas. The beaches lised belwo are the nearest options for guests who are staying in Kayaköy.

Gemiler Beach is just a 10 minute drive away from Kayaköy village, a bay which is surrounded by pine forests. The beach is opposite St. Nicholas island - these early christian ruins are well worth a boat trip to eplore them. Gemiler bay is used by local fisherman you can buy their fresh catch and the restaurant on the beach will cook it for you, can’t get fresher than that. Water sports such as jet ski, banana or ringo can be enjoyed at this beach. There is a fee for parking and for use of sunbeds and umbrellas at this beach.

Darboğaz (Beştaşlar) Beach is a small, pebbly beach favoured by locals as it is small and quiet. The beach lies opposite Gemiler beach and is accessible by boat. You can get a boat ride to this beach from Gemiler for a small fee and the boatman can pick you up later.

Kayaköy to Öludeniz Walking Trail starts at the SE side of the abandoned former Greek town of Kayaköy. The trail follows 5 km of the ancient Lycian Way, winding through the Mediterranean pine forest as it climbs over a spur of the western Taurus Mountains (the trail route is well marked). The trail tops out at Kayaköy summit (about 1000m). There are stunning views of the aquamarine waters of the Mediterranean, small islands and the rocky coastline to the west, and the dark green slopes of the Taurus mountains to the east. The trail starts steeply down, but then becomes more moderate in a series of meadows where there may be grazing flocks of goats or sheep. A cistern for the grazing animals is a popular resting spot (but bring your own water). There are spectacular views of the Blue Lagoon as the trail descends to the edge of Ölüdeniz town, which offers tourist amenities such as cafes, restaurants, beaches, bakeries, food markets, ATMs and parasailing. Sturdy footwear is advised, as well as plenty of water, a hat and sunscreen.

Kayaköy has a delightful selection of restaurants clustered together close to the Old Kayaköy church. The best loved of these are Bay Effeto, The Lebessos Wine and İzela restaurant. Both international and traditional Turkish cuisine can be enjoyed in the restaurants in Kayaköy and for a change of scenery there are lots of options for dining in the nearby towns of Fethiye and Ölüdeniz. As Kayaköy is a more serene area the nightlife in this town is limited to bars in restaurants but there is plenty of lively night time entertainment in the neighbouring areas of Fethiye and Hisarönü.

Local buses run frequently between Fethiye and Kayaköy, it is just a 15-minute drive from the town centre to the village or you could take the well-marked hiking trail which follows an old stone road through the forest. From Kayaköy you could hike through the ruins to the Blue Lagoon at Oludeniz, Cold Spring Bay or Gelimer Bay. 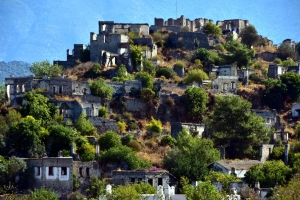 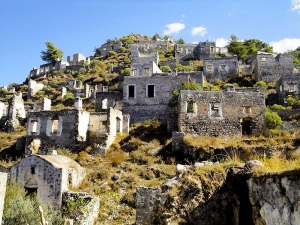 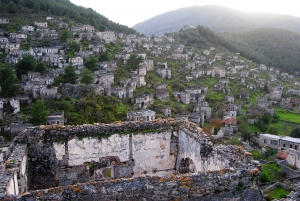 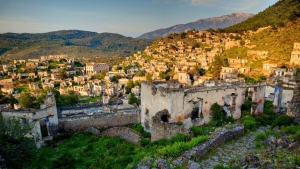